We here in the DoD are pleased to announce the creation of a new professional association (taking “association” and “professional” and indeed all words loosely of course).

Operating out of the DoD’s satellite Ag campus, the new group was founded after discovery* that academia is full of seedy sorts who don’t fit easily in The Club and could use a club of their own.  After long deliberations about what words might combine to make a cool acronym and yet could still be used in polite company, we named the new group the Society for Countrified Academics in Town – i.e., SCAT.  Here, then, are all the heady details.

SCAT Membership Requirements
None really.  We don’t care who you are, town or country, but are pretty convinced that whoever you are it’s probably a lot more interesting than a regulation-issue academic persona permits you to freely express.

SCAT Mission
None really.  Except perhaps to affirm that most missions are best lightly held.  Otherwise you’ll get really frustrated when you head off on a mission and the truck won’t start again.

SCAT Governance
We don’t really have any governance to speak of.  But we do bestow special honors for those who can pass the following quiz.

If I told you that Coca-cola can work both to get crud off your engine batteries and remove staining from toilet bowls, what would you say?

a)    That’s exactly why we shouldn’t drink Coke.  Just imagine what it does to your innards and teeth!

b)    Well, that sounds promising, but if it didn’t work, what a shameful waste of a good Coke.

SCAT Don’t-Call-Them-Meetings
All club “meetings” (but lord, don’t actually call them that!) shall be held in any of the following locations:
-Setting on a porch, any will do

-At any parts counter, hardware store, machine shop, or any diner where the coffee costs less than two dollars and refills are free

To be absolutely clear, don’t-call-them-meetings do not require any actual conversation, much less (god forbid) an agenda.  They can also be held in silence, particularly if it’s an especially fine day that needs our full attention to appreciate.

Things We Incline Against
Talk of pedigrees.  This is a professional association, not a puppy mill.

Rankings of persons, places, and things.  Though we do encourage a heated competitive atmosphere for tall tales about Darwin Award worthy doings involving heavy machinery and power tools.  And getting struck by lightning and living through it.

Loving Walden, though this isn’t a hill we’d die on or anything.

Things We Could Almost Have But Don’t
If we did have a founding father (which we don’t) and we weren’t afraid of him (which we are, even though he’s dead), we’d pick Johnny Pentecost since he exemplifies the art of giving fewer damns.

We were tempted to have a logo and considered a coat of arms featuring a crossed pen and spade, but then asked ourselves:  What the hell would we put that on?  It’s not like we’re commissioning stationary or anything.

We’ve always been mildly attracted by the classy “elite” effect of gargoyles, but have settled instead for some inbred farm dogs.  They don’t move much and are impressively ugly, so we figure they’ll easily pass as nigh gothic architectural flourishes.  We’re all about things nigh around here.

Things We Do Have and Plan to Keep
This goat skull mascot with baton stopper eyes.  Because even though we don’t need a mascot, we sure do like this goat skull and think it deserves a formal role in SCAT, however arbitrary. 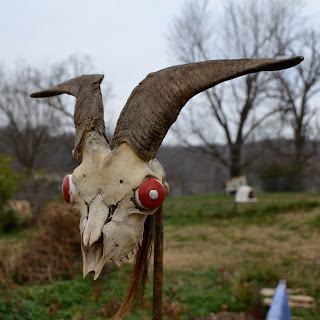 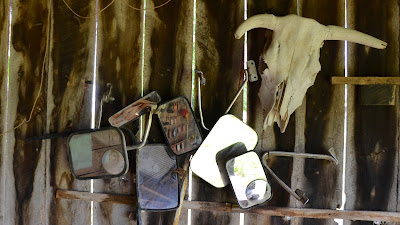 A Bad-Day-in-Academia SCAT Dirge we sing off key when times get tough.

Attitude.  In fact, multiple attitudes, often conflicting and yet still held all at once.

*After this published, I’ve received a lot feedback from others who wear chicken scat in academia.  Several elements of the above are inspired by things people sent me.